| Blog English | ISIS as a stepping stone to Assyria?

ISIS as a stepping stone to Assyria? 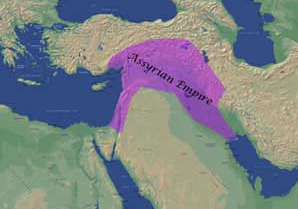 Until recently, you had, the same as I, probably never heard of the abbreviation ISIS. Meanwhile, it is shown in the daily, front-page news. ISIS stands for: Islamic State in Iraq and al-Sham (read: Syria). This movement seeks to establish an Islamic state, in which Sharia law will be in force. ISIS is a Sunni movement from Iraq, but also with great influence in eastern Syria. Currently, she is, in quick tempo, moving ahead in torn up Iraq and does not hesitate to leave behind an enormous trail of blood and fear. In the meantime, Shiite Iran is very concerned about this development in its neighbouring country. But also the United States of America considers it very worrisome how ISIS disrupts Iraq, while its power in the Middle East expands. What seemed impossible, is that the two arch-enemies, Iran and the US, are now being brought together by Iraq. “The enemy of my enemy is my friend”. By means of civil wars, political strife and religious radicalization, the Middle East, in recent years, is regrouping itself. If  ISIS succeeds to actually extend her power, then before long, it is likely that a new state will be formed that will cover (much of) Syria and Iraq. Will this cause Assur or Assyria to reappear on the map?

Isa.10 (KJV) 12 Wherefore it shall come to pass, [that] when the Lord hath performed his whole work upon mount Zion and on Jerusalem, I will punish the fruit of the stout heart of the king of Assyria, and the glory of his high looks. (…) 17 And the light of Israel shall be for a fire, and his Holy One for a flame: and it shall burn and devour his thorns and his briers in one day; Micah 5 (KJV) 5 And this [man] shall be the peace, when the Assyrian shall come into our land: and when he shall tread in our palaces, then shall we raise against him seven shepherds, and eight principal men. 6 And they shall waste the land of Assyria with the sword, and the land of Nimrod in the entrances thereof: thus shall he deliver [us] from the Assyrian, when he cometh into our land, and when he treadeth within our borders. 7 And the remnant of Jacob shall be in the midst of many people as a dew from the LORD, as the showers upon the grass, that tarrieth not for man, nor waiteth for the sons of men.

In the past century, we have seen a reconstruction of countries that were thousands of years ‘off the map’. I think of Lebanon, Egypt and Persia (Iran) that emerged from their axis. Not to mention a Jewish State with Jerusalem as its capital, with in her wake her arch rival Palestine (the Philistines). However, more is to come. For, if I understand the words of the prophets properly, the city of Babel, in the land of Shinar, will re-enter the stage. And also Edom shall again come into play, alongside Moab and Ammon (= Amman, Jordan) Amid the recent developments in the Middle East, is the meaning of Islam, meanwhile, greater than ever. It is the main source of hatred against the Jewish state and its capital Jerusalem. How ever unsightly small that Jewish area may be compared to the rest of the Arab world, its existence is intolerable for a Muslim. Make no mistake, this fight is also, from the Islamic perspective, end-time in nature. Muslims expect the Mahdi, who will conquer the Jews and will return Jerusalem to Muslims. For anyone who lives by the light of the words of the Hebrew prophets, it is extremely exciting to follow the current developments in the Middle East. The period of two millennia is passing and “the third day” (Hos.6:1-3) will soon dawn. In the meantime, all the pieces are posted on the chessboard, after which the final battle can begin. The outcome is already known. White wins! For it is written: “I have set MY KING on Zion, my holy mountain … “.