| Blog English | How do we explain the trinity to Jews?

How do we explain the trinity to Jews?


A couple of weeks back, an interview was published in the Nederlands Dagblad, a reformed daily newspaper, with church-hymn poet and pastor André Troost. Recently a theololgical novel was published by him in which he deals about personal doubts concerning the doctrine of the trinity. He says the following about it:

My deepest motive is Israel. For Jews it is impossible that someone else would be God, beside and of the same essence as the One. This has made the belief in the Messiah impossible for Jews.

Two weeks ago professor Willem Ouweneel responded to this in a weekly column under the title ‘How do we explain the trinity to Jews?’ In response to the above quote he writes:

Well, if it is preached to Jews like that, It is no surprise that no Jew becomes a believer in Jesus! Many Jews think that christians hold to a doctrine of three gods, because rarely it is  explained to them what classic-orthodox christians really believe.

Could it be that this doctrine is incomprehensible in itself and impossible to explain? I have never met anyone capable of explaining the difference between a person and a being. While that is, so I think, rather essential, since the classical doctrine defines the trinity as “one being, three persons”. But what is the value of terms that are not derived from the Scriptures (and thus made up) and of which no one can have sensible thoughts?

Ouweneel protests against the remark of Troost and states:

But it is not like that at all. It is not: the Father is God and this God-Father seems to have a Son, but: the one God of the Old Testament appears to be in the New Testament ‘Father, Son and Holy Spirit’. That is a huge difference. (…) If one, like Troost does, claims ‘that another person would be God, next to and of the same being as the One’ then – I am sorry to say – you don’t understand a bit about the doctrine of the trinity and you also create a big blockade for Jews. There is no one besides God of the same essence as Him. And that has never been claimed by any relevant theologian.

So Ouweneel claims: the God is not the Father, but ‘Father, Son and Holy Spirit’. This claim may be in accordance with the classical confession, it is demonstrably not the way the Scriptures speak about it. In Mark 12 we read that Jesus is approached by a scribe with the question which is the first of all commandments. Jesus answers this with the famous ‘Shema Israel’. And the scribe then responds with satisfaction (Mark 12:32-34):

In truth, Teacher, You say ideally that He is One and there is no other more than He. …  And Jesus perceiving him, that he answered apprehendingly…

Ouweneel is looking for an answer to the question ‘How do we explain the trinity to Jews?’. Well here we have a situation where Jesus himself relates to a Jewish scribe who the one God is. And the scribe has no objection to Jesus’ explanation. And Jesus in his turn, perceives that the scribe understands him well. Is the trinity taught in this conversation? Does Jesus give any hint that the one God consists of multiple persons? Or does he teach that he himself is part of the one God? No, on the contrary! Jesus speaks about the one God as He. Third person singular. “He is one and there is no other more than He”. As complicated as the construction of the doctrine of the trinity is and the terminology which has been devised, so simple is this statement. And realise that also in the New Testament, this is “the first of the commandments”!

Also pay attention to Jesus’ prayer in John 17. He addresses God as Father (verse 1) and says in verse 3:

Now it is eonian life that they may know You, the ONLY true GOD and Him Whom You commission, Jesus Christ.

Here Jesus addresses his Father as the ONLY God. Hereby he does not only show to be unfamiliar with the doctrine of the trinity. It is much stronger: this doctrine is impossible to reconcile with Jesus’ words.

… for us there is ONE GOD the Father, out of Whom all is…

The real question is not: How do we explain the trinity to Jews? The question is: How does a Jew explain the truth of the one God to those with a background of polytheism? Here such a Jew is speaking. Has Paul’s monotheism changed since he acknowledged Jesus as Messiah? Not at all! The terminology of the trinity (“one being, three persons”, God the Son, etc.) is as strange to him as the concept itself. No multiple persons who are all God, but “one God the Father”. And the Son is not “God the Son”, but always and consistently “the Son of God”. In Ephesians 4:6, the same Paul declares:

…ONE GOD and Father of all, Who is over all and through all and in all.

Aren’t there any texts in which the Messiah is identified with God? Oh yes, certainly! But is that identification of the Messiah and God a reason to revise or redefine the oneness of God? Not for the writers of the New Testament. For them, Jesus was the representation of God. Or, as Jesus himself stated: “He  who has seen me has seen the Father …” (John 14:9). And in Colossians 1 Paul calls “the Son of God’s love”, the “image of God, the Unseen” (1:15). In other words, the Son of God portrays the invisible God as an icon. So it makes sense that where we find Jesus Christ, we see God. That is not a theological problem, it is a linguistic phenomenon. The candlesticks are the seven churches (Rev. 1:20). The ten horns are ten kings (Rev.17:12). The bread is the body of Christ (Mat.26:26), etc. Everywhere we encounter this figure of speech called metaphor. And ‘imagery’ we can certainly expect, where the Son is explicitly said to be the image of God. The key is hanging at the door!

But alas, all these totally biblical considerations do not put any weight in the scale of orthodox Christianity. Here and there, People say “Sola Scriptura!” But in practice you are called a heretic when you deny or contradict a doctrine that was elevated to dogma in the fourth century. The doctrine of the trinity has been the benchmark of orthodoxy ever since. And I do not have the illusion that a blog like this will change that.

And that is true! I cannot think of a more powerful condemnation of the doctrine of the trinity. 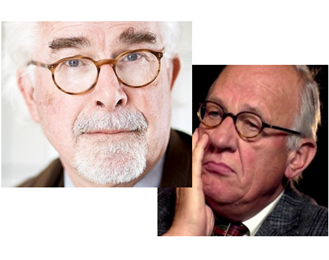