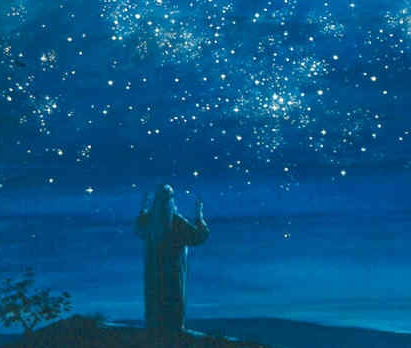 In Romans 4 Paul refers to the history about God giving his promise to Abram (Genesis 15). Childless and uncircumcised Abram was called in the night to look op towards the heavens and the stars. “Thus shall become your seed” as he was assured. Without ifs and buts. And no small prints. And what is written next: “And Abraham believed on Elohim, and He reckoned it to him for righteousness. It means for God Abraham was righteous. Not because he achieved something but because he answered the promise of God with saying ‘Amen!’ Therefore Abram is a model of how God justifies. Not because of any performance. Listen to Paul’s explanation in Romans 4:

4 Now to the worker, the wage is not reckoned as a favour, but as a debt. 5 Yet to him who is not working, yet is believing on Him Who is justifying the irreverent, his faith is reckoned for righteousness.

23 for ALL sinned and are wanting of the glory of God. 24 Being justified gratuitously in His grace, through the deliverance which is in Christ Jesus

All sinned. All are wanting to the glory of God. And all are justified gratuitously in His grace. Is that plain language or not? And with the same clarity  Paul writes in chapter 5:

It’s a perfect comparison. Through one offence (of Adam) all men are condemned to be sinner and mortal. No one is exempt from this. Would  the one (award, the) act of obedience (to the death of the cross) be inferior to that? Would that act have less impact? Paul says: both include all people. Orthodoxy may contradict it and may call it “damnable heresy”. But this is the Evangel – a truly Good Message!!! God justifies the irreverent. All and no one excluded. And that is what I believe!