Would that those who are raising you to insurrection struck themselves off also!

After his personal and pragmatic explanations, Paul here also gives out roundly mocking sneers. He wishes the propagandists of the circumcision that they “struck themselves off”. Elsewhere this ‘cutting off’ can refer to the ropes of a dinghy (Acts 27:32) or to body parts such as an ear (John 18:10), a hand (Mark 9:43), a thumb or a big toe ( Judges 1:6; LXX).

Here in Galatians 5, Paul is clearly thinking of ‘de-manning’: the cutting off of the male member or testicles. As this verb is also used in Deuteronomy 23:1 (LXX) where it is spoken of ‘unmanned’ (castrated) who would not come into the congregation. Paul’s sarcasm is quite overblown: those who want to circumcise others , it is better to cut themselves (= castrate) so that they are automatically cut off from the congregation. Elsewhere he calls these people with a play on words “the maimcision ” (Philippians 3:2).

Many Bible readers have difficulty with this kind of ‘unparliamentary’ language and believe that it does not belong in the Bible. Too bad for them, because the Bible writers do not shy away from being undiplomatic and sometimes even rude. When the stakes are high, expletives can be very appropriate! The wise know season and judgement (Eccl.8:5). 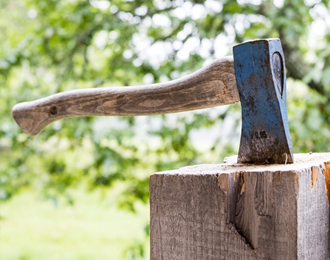