Yet Hagar is mount Sinai in Arabia; it is in line with the Jerusalem which now is, for she is in slavery with her children.

Paul’s casual remark about the location of Mount Sinai is quite surprising. Traditionally, Mount Sinai is always referred to the southern tip of the peninsula between Israel and Egypt. This tradition goes back to Helena, the mother of Emperor Constantine, who is said to have seen in a vision in the fourth century that “the mountain of God” was said to have been located there. As a result, this area also bears the name ‘Sinai desert’. But this is questionable to say the least, as Arabia, in common parlance, is the area east of the Red Sea. This also applies to the area of ​​Midian, where according to Exodus 3:1 Mount Sinai (Horeb) was located.

If Mount Sinai is indeed to be found in Arabia , then this means that the people of Israel from the area of ​​Goshen (north-east of the Nile Delta) hastily left for the Gulf of Eilat, which is an offshoot of the Red Sea. And from there Israel crossed across the Red Sea into Arabia, to continue on their way to the mountain of God in the region of Midian. 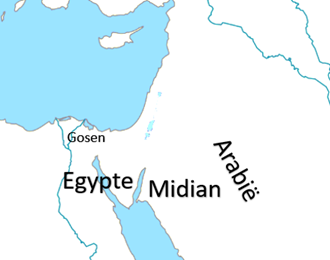