Galatians 4:22,23 – According to flesh & through the promise

The apostle begins his new digression with the Scriptural fact that Abraham had not one but two sons. Later even six more , but here it is about the contrast between Ishmael and Isaac. Paul does not mention the names of the boys, but only points to the social status from which they were born. The first from the maid (or slave) and the second from the free woman.

The maid’s son was “begotten according to flesh,” an expression referring to conventional procreation. In the background of the formulation it also plays a role that this conception was typically human work. With the idea of wanting to lend God a hand. Hagar is here opposite to Sarah. For not from the slave but from “the free woman” would the promised son be born (Gen.17:19). Through two people who by then were both “deadened to the flesh” (Rom.4:19). God had promised a physical son from Abraham and Sarah. And since nothing is too difficult to Him (Gen.18:14), He brought forth life from the dead! 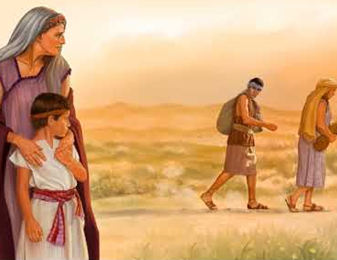