For whoever are of works of law are under a curse, for it is written that, accursed is everyone who is not remaining in all things written in the scroll of the law to do them.

The contrast is stark: the previous verse referred to those “which are of faith” such as Abraham. They rely on God’s unconditional promise. But this verse is talking about “whoever are of works of law.” They assume doing what the law instructs. That is typical of “the old covenant”: the law as a collection of orders that Israel must fulfill. Everyone on that foundation is inevitably also under the curse of that same law. Paul quotes Deut.27:26 in which Israel is told that whoever “does not fulfill the words of the law” is cursed. And all the people promptly said, Amen!

The words of Deuteronomy 27 echo the vow Israel made earlier at the foot of Mount Horeb: “All that YAHWEH  has spoken we will do” (Ex. 19:8). But it was pride—a vow that loads guilt upon guilt. It is illustrative that before Moses reached the people from the mountain, the tablets of stone were already broken… 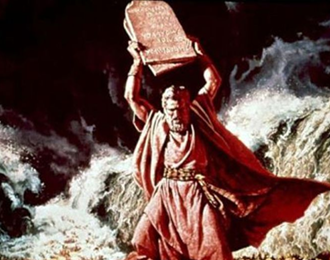