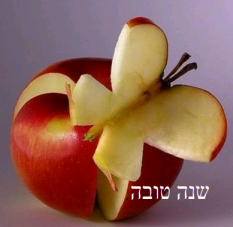 I received in connection with the Jewish New Year (September 29, 2011, 1 Thisri) an email which included the above-pictured photo. A beautiful illustration! A butterfly (a symbol of new life), cut out of an apple. You know, the maligned apple… . “Maligned” in this case, however, is an interesting word, because it is derived from the Latin word for ‘evil’, malus. Since this Latin word also means apple, consequently, via Church-Latin, ‘the forbidden fruit’ easily became an apple. Adam and Eve, after all, ate of “the tree of the knowledge of good and evil” (=malus=apple). This association is based on a misunderstanding, but was easily grasped by the common church people, who hardly knew any Latin. The symbolism in the above-shown picture is more ‘clear-cut’ than the inventor himself likely realized. The eating of ‘the forbidden fruit’ provided humanity, experimentally, the knowledge of evil, but not only that. It also provided the knowledge of good, in the first place. Knowledge of good is not obtainable by itself. We learn to know good only in contrast to evil. It started in the Garden. The first humans had barely finished eating of ‘the forbidden fruit’ or they heard Him, Who came to look them up, asking: Adam where are you? Subsequently, they received the promise of the victory of ‘the seed of the woman.’ Then, and not any earlier, began the light of God’s grace and love to shine. Quite correctly, from times long ago, people have spoken of felix culpa. This is another Latin expression, which means, Happy fault. God arranged for evil to occur, in order to bring about the reality of His intended good. Even though, from it many objectionable conclusions are drawn (Rom.3:8)… it is and remains very true! With God, nothing ever goes amiss! ——————————— translation: Peter Feddema