To me, less than the least of all saints, was granted this grace: to bring the evangel (evangelize)…

Evangel means: Good message. That it is called a message, indicates that it is an announcement. And that it is called good, means that it is joyful news. A ‘good message’ has an incentive in itself to be passed along. To give an example: anyone who has passed a difficult exam, will be glad to share the good news with others.

This stimulus in a ‘good message’ is also reflected in the verb. To evangelize is more than just passing on the evangel. Evangelizing refers not only to an activity but above all to what the gospel also does. The ending – ization has ended up in our language through the Biblical Greek (-izo). It refers to what the verb causes or works out. To crystallize means: to make crystalline. To demonize means: to make into a demon. And so on.

Enclosed in the verb ‘evangelizing’ is the effect of the evangel: the other is made to be evangelist! For whoever hears and believes a good message, will subsequently pass it on with joy! The requirement is: It has to be a really good message. Paul had this. The saving grace of God made its advent to all humanity! 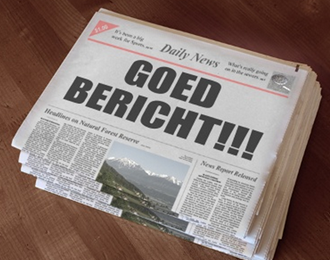