| Blog English | Ephesians 1:21 – up over every sovereignty and authority

Ephesians 1:21 – up over every sovereignty and authority


… up over every sovereignty and authority and power and lordship, and every name that is named, not only in this eon, but also in that which is impending.

Already almost 2,000 years, a man is seated in the heavens, placed in the highest position. Up over all sovereignty and authority and power and lordship. It doesn’t matter whether it’s on the earth or in the heavens, in the visible or the invisible world (Colossians 1: 18). Which name you may call, Jesus Christ received a “name that is above every name”.

The special feature of this top position is that it is unnoticeable on the earth. The last thing the world has seen of Jesus Christ is a grave. That subsequently he was raised at the right hand of God, had been prophesized (Psalm 110). In this position he would wait, until God would set his enemies to “a steel for his feet”. That’s typical for the past 2,000 years. Christ has been raised at the right hand of God, but all who he is and what is given to him, is hidden.

Soon this situation will change, namely at the moment that this eon will make room for the oncoming eon. A totally new phase for this world will come. For than Christ’s reign will be public. Undeniable for everyone! 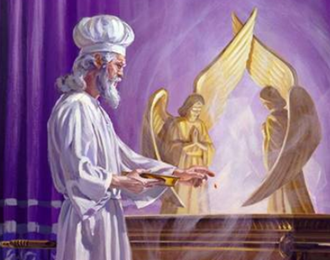