A visitor of the GoedBericht site sent me the following email:

There are many things in the Scripture I enjoy so much. Sometimes I drink in God’s compassion with people, but then there also come texts that undermine me. The Thessalonians letters, so beautiful. But then the following texts. My question is: which people does it relate to? And what is the everlasting destruction? I hope for an answer because these things bother me.

8 in flaming fire, dealing out vengeance to those who are not acquainted with God and those who are not obeying the evangel of our Lord Jesus Christ  9 who shall incur the justice of eonian extermination from the face of the Lord, and from the glory of His strength…
2 Thessalonians 1

Of course I can refer to numerous articles, I wrote on this subject over the years on this website. But I wanted to give a more specific response, tailored to the understanding of someone who apparently was informed recently about the “Saviour of all mankind”. I usually respond personally. But because I am sure that the answer may also be helpful for other (especially new) visitors, in this blog I want to pay attention to objection number one (by far) against ‘the salvation of all’.

If there is such a thing as an eternal destruction (or everlasting punishment), in the sense as we understand it and like the dictionary shows us, namely as forever, than a salvation of all mankind is impossible. Both concepts do not tolerate each other. No wonder that the questioner, impressed by God’s compassion, has been undermined by a text about ‘eternal destruction’. Because if eternal is endless, it means that the fate of many is hopeless… Despite all beautiful verses about God’s compassion and his ability to save.

The meanings of the words ‘eternal’ and ‘eternity’ are the bottleneck in this entire issue. But at the same time I should also say: the emerging problem only exists in our Bible translations. The original words, translated by ‘eternity’ and ‘eternal’, have demonstrably not the meaning of a time without end. If I just limit myself to the Greek in which the New Testament was written, we see that ‘eternity’ is the translation of the Greek word ‘aion’. But, is an ‘eon’ endless? No, certainly not. Thus the Scripture speaks about ‘the conclusion of the eon’ (Matthew 24: 3), or about ‘the consummations of the eons’ (1 Corinthians 10: 11), or about ‘the conclusion of the eons’ (Hebrews 9: 26). What was the solution of the translators? Very sneaky, by translating not ‘eon’ in such cases with ‘eternity’ but with ‘age’ or ‘world’. Would they have been consistent, in our translations we would read ‘the conclusion of eternity’, ‘the consummations of eternities’ or ‘the conclusion of eternities’. But of course that is folly, because ‘eternity’ would no longer have the meaning we are used to assign: a time without end, endless. In the common Bible translations we read about ‘eternity’ and ‘age’ with the impression that it is about different concepts. But the truth is, that in the Scripture both concepts are absolutely identical. The difference is invented by the translators. Not linguistically but for dogmatic reasons.

An eon is a world age. (According to the Scripture) more than one are behind us (‘from the eons in God’; Ephesians 3: 9), but also ahead of us (‘the oncoming eons’; Ephesians 2: 7). This truth is not told in the common Bible translations, and also the view on God’s “purpose of the eons” (Ephesians 3: 11) is obscured. But it is even worse; by changing an eon into an eternity, the eyes are blinded for the ‘expectation of the Evangel’ (Colossians 1: 23)! If an eon is an eternity, we can impossibly believe that Jesus Christ is ‘the Saviour of the world’ (John 4: 42) and ‘the living God, the Saviour of all mankind’ (1 Timothy 4: 10). The Evangel is at stake!

What is said about ‘aion’, of course also applies to the adjective ‘aionios’ usually translated with ‘eternal’. As yearly refers to a year, aquatic refers to aqua (water), lucky refers to luck, so eonian refers to eon. Quite clearly it is expressed in the phrase ‘times eon-ian’, which we can read a few times in the letters (for example 2 Timothy 1: 9). Above all such expression makes clear that eon-ian is not contradictory to time, but is connected to it. One of the oldest and most used Dutch translations renders freely ‘times of eons’. These eon-ian times moreover have a beginning, for we read about ‘before the eons’. So eons have an end, but also a beginning. Thus really connected to times.

We return to the question about the ‘eonian extermination’ in 2 Thessalonians 1: 8, 9. Paul speaks about the time that the Lord Jesus will be unveiled, dealing out vengeance to those who do not acknowledge God. They shall incur the justice of eonian extermination. That means they will perish (= extermination) and not be present in the eons (‘eon of the eons’), when Christ shall be reigning (Revelation 11: 15). They will miss the Kingdom of Christ. During this time they are dead.

But is that the end? No, because Christ must be reigning until also the last enemy is being abolished: death (1 Corinthians 15: 25, 26). How will He abolish death? By vivifying all. (1 Corinthians 15: 22-28)! This is the ‘finishing touch’ of the Kingdom of Christ. So that in the ‘consummation of the eons’ God will be all in all. No one excluded. Punishment, extermination and judgment have a place and significance in the settlement of the eons. Until… death is over and the Life will begin for everyone Everlasting life! End good, all good! 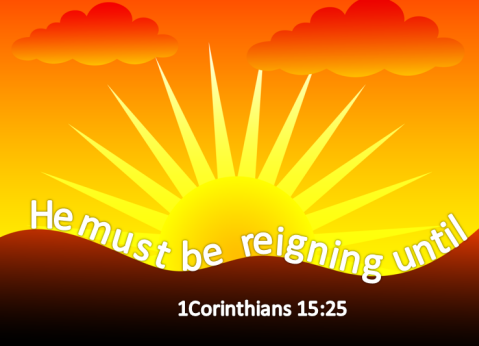