Yesterday (29-04-2007), at the beginning of a study about the living Word, I briefly referred to “the dar”. A ‘dar’ is, as you may know, a ‘male-bee’, a drone. Our Dutch word ‘dar’ (English&gt;”drone”) comes, via-via, from the Hebrew language and is derived from the word “dabar”. “Dabar” is a male-bee and “deborah” (remember the famous female judge) is a female-bee.

It so happens that the word for “word” in Hebrew, also is “dabar”. This is of course not without significance: a bee in general and a dar (drone) in particular refers to… the Word. A bee produces honey, and indeed, it is an image of “the Holy Scripture” (“sweeter than honey, yes, than honey from the honeycomb” (Psalm 19:10). As a bee produces honey, so the Word ‘produces’ the Scripture. It is the result.

But here the comparison does not stop. A drone comes from an unfertilized egg. In biology, this phenomenon is called partheno genesis, which literally means, virgin birth. It is a phenomenon that occurs more often in living nature (why “scientifically irresponsible”?). “The Word (&gt; dabar!) was made flesh” by partheno genesis. That is, without a natural father.

About the life of the bees is much to tell. But let me, in connection with the drone, limit myself to one more peculiarity. When, in the late summer, the queen ascends to great heights (the so-called bride-flight) and way up there is fertilized by drones, then, they have fulfilled their purpose. The queen is fertilized, once and for good. In a kind of bag she keeps the seed and the queen can lay fertilized eggs, all her livelong day (up to five years). When the drones then return to the hive, they are no longer welcome. At the entrance, they are stung and killed (= the drones’ slaughter). Is not that, essentially, the story of the Dabar? He is the One Who brought to light new life, but, nevertheless, was not welcome by His people. He suffered “outside the gate”. But despite this rejection, the ‘drone’ has once and for all time accomplished his work. The new life is established! 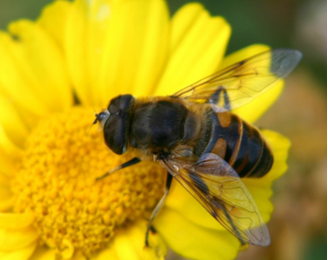