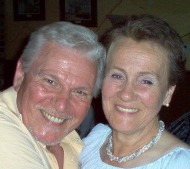 The opportunity, at long last, presented itself for my wife and myself to visit with what we call, “the circle in Weert”. Overnight, we stayed in Eindhoven from which we, the next morning traveled to Weert in Limburg. The road conditions forced us to drive rather slowly.

In Weert, we were most heartily welcomed into the home of Frans and Lonnie Beerens, who, for many years already, had opened their house as a meeting place for a small, local ecclesia. Frans, who now has been retired for a few years, has been a seeker after truth, from early on in his life. As is the case with most of the members of group, Frans has a Roman Catholic background, but was not at all understood and was altogether unable to get satisfactory answers for his searching questions. After many wanderings through various churches and sects (including the Worldwide Church of God) which wearied and frustrated them with laws and burdens, they finally found joy and peace in the grace of God. And around that message they meet (without membership and in complete freedom) a number of times per month with each other; with as criterion: What does the Scripture say? and what does Paul teach us as “teacher of the nations”? A few years ago, Frans and those with him came into contact with GoedBericht.nl and it was soon discovered that we were on the same wavelength. And this created a close relationship. The circle in Weert has its own modest website, which Frans maintains and looks after. There you can also gain an impression of their home-meetings’ content and form. Today, I was the guest speaker in this circle and that was (at least to me) a real pleasure! Together we studied the passage of Titus 2:11-15, where Paul writes about the saving grace of God that has appeared to all men, and this Good News educates us and makes us zealous of good works. After concluding a day filled with many blessings and much joy, we happily and safely traveled back home to Rijnsburg.