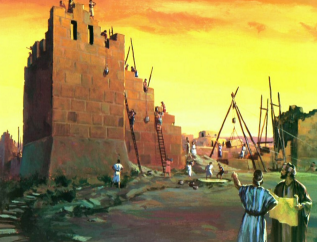 In the previous blog we saw that from the moment the word had gone out from king Cyrus to restore Jerusalem, seventy weeks of years would follow until the time of the Messiah. Daniel 9:25 says it as follows:

Know therefore and understand, [that] from the going forth of the commandment to restore and to build Jerusalem unto the Messiah the Prince [shall be] seven weeks, and threescore and two weeks: the street shall be built again, and the wall, even in troublous times.

Reconstruction of the city in seven weeks of years

The period of the first seven weeks of years starts with the word of Cyrus to rebuild Jerusalem. If the sixty and two weeks end with the Messiah, to what else would the seven weeks of years be referring but the construction of the city? For another option than this one the given text does not give any indication. With this, these seven weeks of years refer to the period of Ezra and Nehemiah in which temple and city were rebuilt. Indeed, following the commonly accepted chronology this period of time lasted much longer. The return under Cyrus is dated at 536 before Christ and the return under Ezra around 457 BC which is no less than seventy nine years later. This is incorrect.

Reconstruction of the Temple

Let us take a closer look at the period of Ezra and Nehemiah from Biblical data. When Cyrus’ word went out to rebuild Jerusalem and the temple,  a group of Jews, led by Zerubbabel and the high priest Jeshua, went to Jerusalem. In the second year they laid the foundation of the temple (Ezra 3:8-10). Because of lots of counteraction and false pretences from the surrounding people, the reconstruction had to be ceased for the time being (Ezra 4:5-7). Not until the second year of king Darius the reconstruction was started again (Ezra 4:24). For how long the cessation of the construction work lasted is not mentioned explicitly by the Bible, but it does mention that the reconstruction is continued under the same leadership as before, namely Zerubbabel and Jeshua (Ezra 5:1).

The reconstruction of the temple is successfully completed in Darius’ sixth year of reign (Ezra 6:15). After this the scribe Ezra went from Babel to Jerusalem to support the people and to teach them the law of God (Ezra 7:10). In the commonly known chronology there is a time period of at least sixty years between the completion of the temple and the “after these things” of Ezra’s arrival in Jerusalem (Ezra  7:1). This time interval is not given by Biblical arguments, but in order to stay in check with the secular chronology. The only Biblical argument which is given, is that the temple was completed in the sixth year of Darius after which Ezra arrives in the seventh year of Artachsasta (Ezra 7:7). The mistake that is made is that Artachsasta is not a name but a title. Artachsasta or Artaxerxes means ‘Great king’ or ‘Emperor’. The Artachsasta of Ezra 7:11 is identical to the Darius of Ezra 6:15. For this reason Ezra did not arrive sixty years after the completion of the temple but in the subsequent year!

Another thirteen years later, in the twentieth year of Artachsasta, Nehemiah, the butler of the king, finds out that the construction of the walls of Jerusalem is met with a lot of counteraction (Neh. 2:1-3) and he gets permission and even cooperation of the king to go to Jerusalem and to rebuild the city (Neh.2:5-9) He proceeds expeditiously and despite the opposition the wall is fully restored in just fifty two days (Neh. 6:15). Nehemiah proceeds with his work and until the thirty second year of Artachsasta, so within twelve years (Neh. 5:14), he finishes his work. The governor Nehemiah thereby works together with the priest-scribe Ezra (Neh. 8:9).

That the common chronology is flawed, is proven by a remarkable detail in the books of Ezra and Nehemiah. In Nehemiah 10 we read that a covenant is drawn up by priests, Levites and by “the chiefs of the people” (Neh. 10:10), The list of names which follows is for more than one-third (!) identical to the list of names we find in Ezra 2 in which prominent names are mentioned of those who returned under supervision of Zerubbabel and Jeshua. So this means that a large part of those were still alive! In the commonly accepted chronology this is impossible. It would mean that these men would have been between one hundred and thirty and one hundred and fifty years old, which is absurd. In short, the whole period from the return under Cyrus until the completion and reconstruction of Jerusalem had taken seven weeks of years, in other words, fifty years.