| Blog English | Belief can never expect too much

Belief can never expect too much


A visitor of this site sent me an email. She starts with these words:

Last Sunday I listened to the first part of Psalm 139. In that presentation you mentioned briefly the lyrics of a (Dutch) song: belief can never expect too much. I don’t remember exactly the context, but that doesn’t matter. But about that phrase I have a question. What does it mean exactly? What does ‘expect too much’ mean? And what does ‘expect’ mean? Is that being certain that He is going to do, what the believer prayed for? Or is that yet too much? For me it means that we, believers, after praying, can trust that God does what we ask. Not only that He cán do, or that He wants, but that He also dóes it.

I expect God that He does …, if I prayed for it. Is there a difference between what belief asks and what I ask? And what may be asked? Only things related to belief? Or also earthly things? For example: When God says that it’s not good for the human to be alone, may I expect that He gives me a man? (and entrust that He does)? And certainly when I pray for that?

Good questions. For indeed, the words ‘belief can never expect too much’ leaves scope for more interpretations. The context of the speech was that it’s impossible to think too big about GOD’s work of salvation in Christ. That is because the Scripture teaches that the salvation, reconciliation, justification and vivification are universal (1 Timothy 4: 10; Colossians 1: 20); Romans 5: 18; 1 Corinthians 15: 22). All-encompassing. By definition it cannot be made more or bigger than it already is.

The in Holland well known line of poetry ‘belief can never expect too much’ (nooit kan ‘t geloof teveel verwachten) is based on the fact that GOD always gives what he promises. Trust in who GOD is and what He promises will never be damaged. Of course it is of the utmost importance to know what He promised and to whom. For example, GOD promised material wealth and abundance to the nation Israel, namely in case they walk in His ways (Deuteronomy 28). It should be totally inappropriate to transfer such a national promise to individual believers in our days. Believers would rather expect persecutions (2 Timothy 3: 12). We need to read the Scripture with distinction. Correctly cutting the word of truth (2 Timothy 2: 15). To whom it’s written and with regard to what period?

For sure there is a big difference between what I expect and what belief expects. Also if I pray very devoutly for matters that I wish fervently. Imagine, somebody prays for a life partner. There’s nothing wrong with such prayer. Surely, let’s all our requests be made known to GOD (Philippians 4: 6). But that’s no guarantee that we receive what we would like. That’s, by the way, not because GOD gives us less than we ask, but just because He gives móre than that. If we ask for silver, He gives gold, i.e. more and so much better than we request. It’s a matter of belief (= trust) that the Creator of heavens and earth knows what He is doing. He knows incomparably better what is good for us. So much better than we know ourselves. Paul adds: we may let all our requests be known to GOD, by prayer and petition, with thanksgiving (Philippians 4: 6). When we lay down our request at GOD, we can thank Him in advance. Not because He necessarily would give what we want, but because we can trust that his ways are always perfect! Surely, He is able to give what we request, but much more: He will give what we need in His view! GOD has everything fully under control and the peace He gives (“the peace of GOD”) will garrison our hearts and apprehensions! That is the powerful promise of Philippians 4: 6 and 7! Paul shows in these verses that the prayer doesn’t change GOD, but the one who prays.

But if it’s about matters of belief: if I pray every day that God wants to give me peace and joy and happiness, and patience etcetera (fruit of the Spirit), and I don’t receive, because I’m nót happy and I don’t feel peace and joy, just bitterness and disappointment..

How then to explain such text? That belief can never expect too much? If I pray in the morning and ask God to help me to live according to His will. That I may take the good decisions and that I may be good and friendly to people. Can I then expect that He does?

But if I have to pray for forgiveness in the evening because I didn’t live according to His will, and not friendly to people around me, did I expect too much of Him?

That feels like an enormous disappointment. And then I think: what is the use for me of such a God?

In above mentioned words an enormous unawareness resounds about our identity and position in Christ. Who is in Christ, is righteous in GOD’s view (Romans 4 to 8). That’s even much more than forgiveness. Forgiveness means: your sins and mistakes are not charged. But being justified means: for God you’re righteous, perfect, free of all accusation. That’s His view of us and that’s how He reckons. As He called Abram Abraham (=father of a throng of nations), while he was childless. GOD oversees the future and saw what Abraham was going to be, and so he addressed him. And Abraham believed GOD. Well then, so it’s also with us. In GOD’s view we are justified (in Christ). Once and for all! And how GOD reckons, we should also reckon. Dead for sins, and alive for GOD in Christ Jesus (Romans 6: 11). Don’t ask for forgiveness because our failures. No, thank GOD that He justified us in his Son! By the way, not as a finish of the day, but already as the start of the morning. As soon as we arise!  Then we don’t start with asking if GOD wants to give us peace and joy? No, we thank Him thát He wants that and that He is also able to work it out in our lives. For these qualities are “the fruit of the spirit” and not the result of our own efforts. That is living from the richness of GOD’s grace. That makes happy in advance. For we  consequently don’t reckon with ourselves. Only there, if we expect something of ourselves, we can (and will) be disappointed in ourselves. But in the belief to what is spoken by GOD, we can never expect too much! Begin with accepting in belief in who you are in Christ (in the view of GOD Himself!). 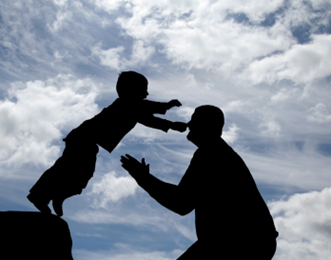