QUESTION: In Matthew 27:50-53, we read that when Jesus died, the veil of the temple was torn, the earth quaked, rocks were split and graves were opened. But the most remarkable thing is that many bodies of the saints were resurrected and went out of the graves after Christ’s resurrection and appeared to many. How should I understand that? Did the saints, after their resurrection, first, as yet, remain a few days in the grave? Why does only Matthew pay attention to this fact and why ever so briefly? Who were those saints, anyway? And what has become of them? ANSWER: Matthew 27:52 and 53 belong to the most enigmatic Scripture passages that I know. More than the concise information that Matthew 27 presents us, we do not have, because Mark, as well as Luke and John are completely silent about this resurrection. It is as if the resurrection of the one Son of David, completely pushed to the background the resurrection of these many saints. The common placement of punctuation marks suggests that the resurrection of these saints happened a few days prior to them come out from the graves. But this absurd reading (in my opinion) is not at all necessary. The “after His resurrection” can refer to both: “and they went out of the graves” as well as to “and many bodies … were resurrected”. So, then we read:

51 And lo! the curtain of the temple is rent in two from above to the bottom, and the earth quaked, and the rocks are rent, 52 and the tombs were opened. And many bodies of the reposing saints were roused, 53 and, coming out of the tombs after His rousing, they entered into the holy city and are disclosed to many. (CLV)

In this rendering of the passage the scenario is: Jesus died, there is an earthquake and many graves (on the Mount of Olives?) break open. And then takes place, after Christ’s resurrection, the resurrection of many saints and them going out from the graves, etc. Who these resurrected saints were, is not mentioned. It concerned “many bodies of the saints (not all) who had fallen asleep”. How many is “many”? Perhaps it are those departed-ones who had accepted Christ during his sojourn on earth? According to John 1:12, they had received the right to become children of God. A privilege which, however, could not be realized until after Christ’s resurrection, not before. After all, Peter declares (1Pet.1 3) that believers are born again to a living hope, through the resurrection of Jesus Christ from the dead. Rebirth and through it becoming a child of God, is thus, only possible following the resurrection of Christ. Well, the departed saints had received the right to become the children of God, and actually became this when they were resurrected at Christ’s resurrection, even as a firstfruit! Mat.27:53 says that these resurrected saints appeared to many in the holy city, Jerusalem, i.e. (Mat.4:5). The word “appeared” indicates that they were of and on visible, not permanently. So it was not a return to their earthly existence, as we, for instance, read that of Lazarus (John 12:9-11). That the resurrection of these saints would be permanent, seems not likely, because, according to Paul, the next class who will be vivified, as Christ was vivified, will not be earlier than in His presence (1Cor.15:22,23). Concerning what happened to these resurrected saints, after their appearances in the city – the text in Matthew is totally silent. Let us respect this silence and not speculate. 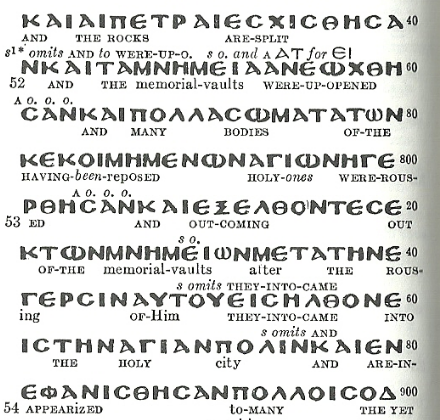