| Blog English | a look back at: debate about heaven & hell

a look back at: debate about heaven & hell 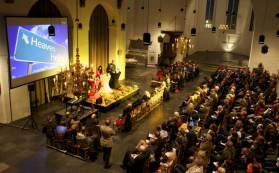 Thursday, April 26, a debate took place in Utrecht about heaven & hell, organized by the Evangelical Broadcasting Organization, among others. Earlier, I gave it some attention, but did not hide the fact that I had little or no expectation of good to come out of this scheduled meeting. Reading the various reports of the debate, proved that my expectation was not wrong. Certainly, the atmosphere of the debate, according to the speakers (Vreugdenhil, Kollenstaart and ter Beek) was good, but unfortunately they kept each other sweet with theologizing and fiction. Let me illustrate this with a few quotes from the report that the Nederlands Dagblad published:

On one thing the three speakers agreed. The Bible speaks of hell ….

This seems to be harmony, but it sounds false for anyone who wants to hear only the Scripture, because the word “hell”‘ is not a “sound word”, i.e., it finds no basis in Scripture. During this debate, it served as a container-concept. If the Bible now speaks about Gehenna (= valley of Hinnom), the lake of fire, the realm of death, outer darkness, the second death, the judgment over the nations, the judging before the great white throne, etc., everything fell under the heading of “hell”…

The Bible speaks of hell in terms of fire, darkness, weeping and gnashing of teeth – these are metaphors, figures of speech.

Such a conclusion is inevitable, when you’re mixing all these concepts. Gehenna, i.e., the valley of Hinnom, is an unmistakable literal location where fire will burn, literally. The prophet Isaiah (66:24) talks about it in realistic language and Jesus confirmed this several times. This also applies to “the lake of fire and brimstone.” With the words “outer darkness” it is different, because this formulation is used in parables as a place outside the room of festivities, where this room serves as the image of the Kingdom that will come (Mat.8:12; 22:13). “The weeping and gnashing of teeth”, speaks of the wrath (see Ps.112:10) of them (= Israel), who mistakenly thought to participate in that coming Kingdom, but they will perish (Acts 3:23; Ezek.20:36-38).

When asked about the “facts concerning hell”, Vreugdenhil pointed out that we only read about three hours of darkness on earth, when Jesus descended to the place where the evil forces dominate, and He put them to shame. “But you read nowhere that that place ceases to exist – it is forever…

A series of errors! The three hours of darkness where God left Jesus to His enemies, Vreugdenhil calls it “the hell”, but there is not one Scripture that supports this so-called “fact”. And what to think of the argument that Jesus experienced “hell” for three hours, while everyone else who ends up in that place will be there forever? For Jesus, hell was only temporary? Where is the logic? Furthermore, I will be silent about the idea that Jesus, during the three hours of darkness, descended to hell and put the evil powers to shame by triumphing over them. This He did not on the cross, but when Jesus rose from the dead (cp Col.2:15 and 1Cor.2:8).

God wants all men saved, but will He gets what he wants, asked Knevel? No, replied Kollenstaart, bluntly, there are those who are perishing, ‘because man has the freedom of choice.’

There are people who are getting lost, says Kollenstaart. That’s right. But since when is a condition of being lost a hindrance for God to save? Being lost is precisely a prerequisite to be rescued! Kollenstaart states that God does not get what he wants. Well, that’s not the God of whom Job spoke with awe, “I know that You can do all things, And no plan of Yours can be thwarted” (42:2). How can Kollenstaart sing the hymn in which it says: “What God’s love desires, His power will not deny Him? God indeed will that every person be saved, but if a man does not want it, it will not happen. In other words, God proposes, but man disposes?

But what about the Cambodian dictator Pol Pot, who is responsible for terrible crimes? Is a denial of hell not at great odds with God’s justice, asked a lady of Johan ter Beek? He had a solution for this. He does believe in a judgment, but maintains the promise that God will make the world completely new. ‘God will erase our memories and eventually His own, as well, so there will be no more any memory of evil.’

Johan ter Beek was the only speaker in the debate which maintained that God will save everyone. “Eventually, it will turn out well for everyone,” he correctly contended. But what a poor argumentation! The Bible does speak of wiping away every tear, but not of the erasure of memory. Isaiah 65:17 says, “the former shall not be remembered, nor shall they come upon the heart.”, but that’s different than deleting the memory. Pol Pot awaits, to continue with the given example, “tribulation and anguish” (Rom.2:9), because God will avenge. But God does not stop half-way with His work, because Pol Pot’s heart would then still be unchanged. God not only takes vengeance, He also reconciles. That is to say, He changes enemies into lovers, who eventually will say, to the glory of God the Father: “Jesus is Lord” (Phil.2:10,11)! “By the blood of the cross,” says Colossians 1:20. For on the cross God demonstrated: no enmity so great, but that my love surpasses it, always! The recent discussions, under the leadership of EO, showed how in Christian Holland people think about- and how embarrassed they are with the topic of “hell” But it gave a welcome opportunity for GoedBericht.nl, precisely against this dark background, to make known what Scripture reveals and to highlight the spurned message of the apostle of the nations:

Faithful is the saying and worthy of all welcome (for for this are we toiling and being reproached), that we rely on the living God, Who is the Saviour of all mankind, especially of believers. These things be charging and teaching. 1Timothy 4:9-11