| Blog English | 17th of Nisan and the Ararat

17th of Nisan and the Ararat 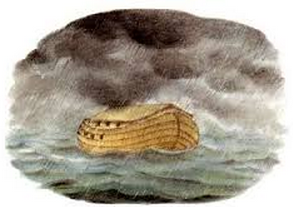 Since the exodus from Egypt, Israel knows two calendars. In Exodus 12:2, we read that the month of Passover (Nisan/Aviv) for Israel, from now on, would be the first month of the year. On this occasion arose a calendar with a new counting of months, next to the old calendar with the original counting. And so it can happen that Israel (even today) on the first day of the seventh month (Tisri), will celebrate new year’s day. The seventh month was, until the time of the exodus from Egypt, the first month of the year. In Genesis 8:4, we read (KJV):

And the ark rested in the seventh month, on the seventeenth day of the month, upon the mountains of Ararat.

The seventh month in the days of Noah, corresponds to the month of Nisan. Today (April 17, 2014) is the 17th of Nisan on the Hebrew calendar and thus also the anniversary of the stranding of the ark on Ararat. But not only that. It is also, three days after the fourteenth of Nisan, i.e. three days after the slaying of the Passover. The seventeenth of Nisan is the date of the resurrection of Christ! The stranding of the ark on Ararat is a type of the resurrection of Christ. The waters of death still had the upper hand and the dry was not yet visible. But the tide had now definitely turned. That is also, to which the name Ararat refers: the curse is reversed (‘arar’ is the Hebrew word for curse). So it is, since Christ’s resurrection. Death still reigns on earth and superficially speaking, nothing has changed in this world. But… hidden from view is found the solid foundation… the curse is reversed… on the seventeenth of Nisan. In Christ (the ark), since that date, there is peace and rest. For the whole of humanity, the curse of sin and death will be reversed into justification and Life (Rom.5:18; 3:23-24; 1 Cor.15:22)!