Be not deceived: evil conversations are corrupting kind characters.

A person easily deceives himself. Clothed with fallacies. For example that something would be true, because a certain authority claims this. Or because everyone assumes. Or because it feels good. With such and many other fallacies a person can mislead himself and others. Everyone should be aware of this and learn to think critically.

With the “evil conversations” Paul is referring in this context to the claim in Corinth that there would be no resurrection of the dead (: 12). From the word for “conversations” (Greek “homilia”) our word ‘homiletics’ (preaching) is derived. If in false preaching and conversations an untrue assertion is heard, without being refuted, then the bad effect will be bound to ensue.

The “evil conversations” in Corinth were not innocent. Because denial of the truth is like leaven: it brings spoilage. What threatened the ecclesia in Corinth, later became a fatal reality in the Christian world. Her meetings are all “evil conversations”. They officially deny what is death and also the destruction of death by the vivification of all. What were few in Corinth is now mainstream. Be not deceived… 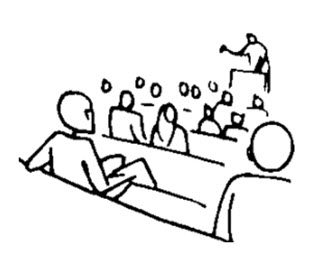