So that, whoever should be eating the bread or drinking the cup of the Lord unworthily, will be liable for the body and the blood of the Lord. Now let a man test himself first and thus let him eat of the bread and drink of the cup.

If we simply leave this verse in its context, the meaning of the word “unworthy” is perfectly clear. It has to do with the way in which people took part of the meal in Corinth. That was not “Lordly” but shameful. Or what else could it be called when one is hungry while the other is becoming drunk?

In the course of church history this verse has been given a very different twist. The meal took on the character of a ‘sacrament’ with only a scanty piece of bread and a small sip of grape juice remaining. The “unworthy” could no longer relate to the way in which people ate or drank, but were asked whether they were ‘worthy’ enough. To participate in the sacrament, people were thrown back on themselves to investigate whether they were ‘good’ enough. Conditional and terrible … instead of “Lordly”. 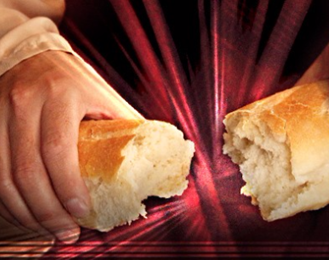