Nor yet be becoming idolaters, according as some of them, even as it is written, “Seated are the people to eat and drink and they rise to sport.”

The people had barely exclaimed the solemn vow (“All that YAHWEH says, we shall do” Ex. 19:8), or they already fell into idolatry. Reference is made to the history of the golden calf that Israel had made when Moses’ return failed to happen. Had Israel simply trusted in GOD who had promised to bring them into the promised land, they would not have come up with the foolish idea of making themselves gods (Ex. 32:1). Idolatry always means making one or more gods and giving them religious honor. Creating an image of GOD is by definition a gross disregard for the fact that GOD makes himself known.

Paul refers to Exodus 32:6 where it says that the people had gathered around the created image and experienced a social happening there. That was undoubtedly recognizable for the Corinthians, who were often invited to attend family celebrations in temples. But, Paul says, participating in such religious celebrations means participating in idolatry and false religion. It shows guts to refuse that. Nobody wants to be called anti-social… 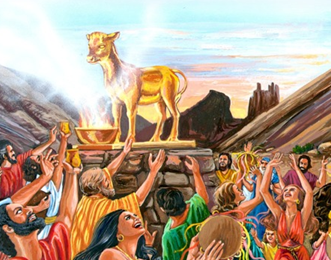