… and all drank the same spiritual drink, for they drank of the spiritual Rock which followed. Now the Rock was Christ.

Israel passed literally through the sea and received literally food from heaven. Also literally water came from the rock, more than once (Exodus 17: 6; Numbers 20: 21). And still, Paul speaks about “spiritual drink” and a “spiritual rock” That’s not because it shouldn’t be literally, historically true, but because as well as the drink as the rock has above all a spiritual meaning. The water that came of the rock (Greek: petra) is a type of spiritual, living water. The people could die of hunger and thirst, but God supplied water, so they could survive. Therefore, this water is a type of life that overcomes death. That also counts for the rod, whereby Moses would hit on the rock. The rod is an emblem of resurrection life. The rod brings forth life (Numbers 17: 8) and victory (Exodus 17: 9).

Which rock on the journey in the desert brought forth water, spiritually it was each time the same rock: Christ. Wasn’t Jesus himself once buried in a rock (Matthew 27: 60), to arise from it, once and for all, living as “the Christ”? 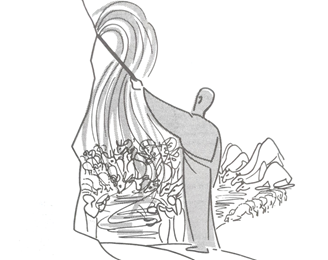