1 Corinthians 10:18 – Participants with the altar


Observe Israel according to the flesh. Are not those eating the sacrifices participants with the altar?

Paul argues with some rhetorical questions that believers would keep away from idolatry. He refers in this context to celebrations in temples were visitors took part in meals (:21) Wouldn’t those who do that participate (and therefore agree with) the idolatry? Just as whoever participates in the meal in the ecclesia, also has fellowship with the blood and body of Christ (after all, bread and cup refer to this: 16,17).

In verse 19, Paul derives an argument from the people of Israel under the old covenant. There was the so-called ‘peace offering’ in which a slaughtered animal ascended to God on the altar while the remaining flesh was destined to be eaten by the people on the same day (Lev. 7:15). That was a sacrifice of peace (communion!), In which the people participate with the altar and with the sacrifice that rose from there.

The peace offering is a beautiful type of him who was slaughtered and then exalted and who rose from the grave towards God. By eating the peace offering, the people participated with the altar. Eating in such a setting is pure worship! 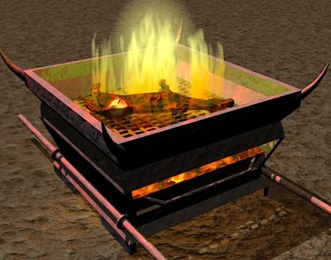